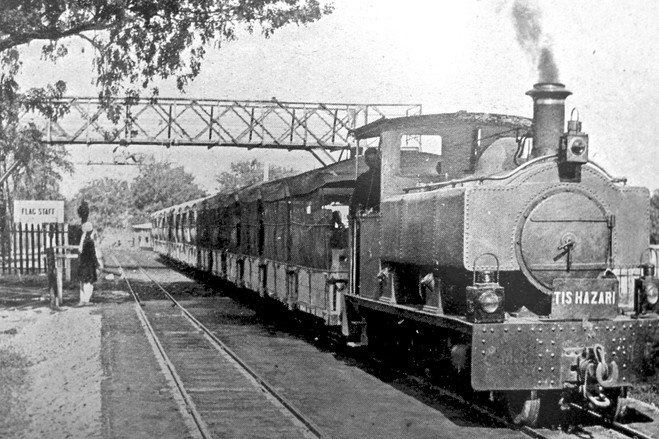 The Railways in India have been around was a long time now. Precisely 165 years. On the 16th of April, 1853 the first train passenger train in India was flagged off at BoriBunder now popularly called the ChatrapathiShivaji Terminal. This line was built in 1,676 mm (5 ft. 6 in) broad gauge, which became the standard for railways in the country. An estimated 400 people were part of this historic journey to Tannah now Thane. Among the distinguished passengers were Merchant Sir JamserjeeJeejeebhoy and the then governor’s wife, Lady Falkland. The 14 carriages were filled with from various ranks of the British and Indian aristocracy.

Three locomotives: Sahib, Sindh, and Sultan were used to power the train. The train left the station precisely at 3.30 PM amidst a 21-gun salute.

The 21-mile long journey to Tannah (Thane), was completed in approximately one hour and fifteen minutes. After departing from BoriBunder, the train made its first stop at Bycullah and then made another stop for fifteen minutes at Sion, to fill water into the engines. Interestingly the current CST-Thane train also follows the same route.

A popular description of that day says the natives salaamed (saluted) the magnificent steam train as it passed. The railway was an instant success, and it was the day that India would never forget. The event gave rise to the Great Indian Peninsular Railway. Following the journey, the period between 1853-1854 saw the establishment of two companies, which pioneered the railway construction in the country.

While 1853 was the year Indian Railways was formally launched, the British had begun experiments as early as 1836. The very first Indian rail line was in fact constructed near Chintadripet Bridge, near Chennai. The first train ran from the RedHills to ChintadripetBridge in 1837. On 8 May 1845, Madras Railway was incorporated, and East India Railway (EIR) was incorporated the same year. On 1 August 1849, Great Indian Peninsular Railway (GIPR) was incorporated by an Act of Parliament. A “Guarantee System” providing free land and guaranteeing rates of return (5%) to private English companies building railways was finalized on 17 August 1849. This ensured a strong economic backing for the railways.

November 1852 saw trial runs along the Bori-Tannah line. Since a shunting locomotive was used instead of a rail engine, 1853 has been established to mark the start of the golden era of Indian Railways. Following which, first passenger railway train in East India ran from Howrah (near Calcutta) to Hoogly on 15 August 1854. A railway budget was presented for the first time in 1925.

After independence, Railways has grown rapidly, and often the reforms and structure have not been able to keep pace with its growth. However, during 1951 and 1983,zonal reorganization and significant improvements in services were made.

Today, the Indian Railways is among the largest in the world and boasts of many modern facilities. Train inquiry which was earlier possible only at the stations can now be made with a click of a button on your smartphones. Seat availability and ticket booking can also be done easily at home. For those who have seen the railways grow into its current form today, would have witnessed one of the most splendid developments of modern times.